College students looking to be immersed in French culture will find just that at the Figge Art Museum’s annual College Night. As an extension of the current exhibition, Turn of the Century Posters from the Krannert Art Museum Collection, which features works from French artists, “Paris When it Sizzles” will be a night full of engaging French-themed activities and ambiance. The event is co-sponsored with the University of Iowa Museum of Art and hosted by Western Illinois University Museum Studies students.

On November 10, the Figge will host an event to celebrate the exhibition Restoring the Spirit: Celebrating Haitian Art which features art work that vividly portrays Haitian culture and history. The Figge is partnering with Kids Against Hunger Your Quad-Cities to bag lifesaving food which will be delivered to Haiti.

Environmental recovery is an issue that begins with pollution and affects each person. For some, it is a subject for inspiration. Brooklyn-based artist, Aurora Robson, uses pollution as a vehicle to communicate her nightmares, while converting the negative into something positive. She creates large scale sculptures from plastic bags, bottle caps and similarly discarded materials and shapes them into masses, composed of unique forms.

PRESS RELEASE
Grant Wood Artifacts on Display at the Figge

August 2011 - Now on view at the Figge Art Museum is a selection of treasured artifacts that once belonged to Grant Wood, the artist of one of America’s most famous paintings American Gothic (1930). Included in the new display is the “Persephone” cameo broach, worn by his sister who posed for American Gothic, Wood’s trademark glasses along with those belonging to his father, Francis Maryville Wood, a copper picture frame made by Grant Wood containing a photo of Wood in his WWI army uniform, the Wood family bible and Wood’s paint brushes and palette, easel, and other artifacts from Wood’s life.

The Figge Art museum will host River ARTS Live, a free walk-in art project at River Roots Live on Saturday, August 20 from noon to 6 pm. Event attendees are invited to stop by the Figge’s art tent in the Junior Jam area to create sculptures out of plastic materials recovered from the Mississippi River during Living Lands and Waters’ XStream Cleanup.

Davenport, Iowa - August 2011 – Architecture students in Iowa State University’s College of Design created designs for the construction of a fictional museum in Columbus, Indiana’s already architecturally diverse community and a selection of those designs will be on view at the Figge Art Museum starting September 3 in the exhibition, Innovative Objects of Design: Museum Proposals for Columbus, Indiana.

The Figge Art Museum is pleased to announce that it has received a grant from Humanities Iowa. The Figge was recently awarded a $5,000 grant for its upcoming exhibition Turn of the Century Posters from the Krannert Art Museum Collection (Sept. 3, 2011 – Jan. 8, 2012).

​The Figge announces the fall exhibition, Restoring the Spirit: Celebrating Haitian Art and the recent reinstallation of the Figge’s Haitian Gallery with an event on May 18. The upcoming exhibition celebrates Haiti’s complex visual traditions and the devotion of artists to creative endeavors in the face of national adversity. The exhibition will open September 17 and run through January 15, 2012.

Life-sustaining yet also destructive, the transformative properties of water play a crucial role in shaping our physical and cultural landscape. On May 7th, the Figge will celebrate the beauty and power of water in the exhibition Water Views from the Figge Collection. Drawing upon its collection of European, American and Japanese paintings and works on paper, the exhibition offers a broad survey of water imagery and explores the cultural perceptions imbedded in them. This exhibition continues through August 21, 2011.

In remembrance of actress Elizabeth Taylor, the Figge will have on view their serigraph Liz Taylor by Andy Warhol. This recognizable work will be on display in the museum lobby from Tuesday, March 29 through Sunday, April 10, 2011.

As part of the UIMA’s partnership with the Figge Art Museum, a gallery of African art opened in the Davenport museum in early December. Curated by Christopher Roy, UI professor of Art History and Elizabeth M. Stanley Faculty Fellow of African Art, Selections from the Stanley Collection features over 30 African objects, and is an ongoing exhibition intended to represent the artistic diversity found throughout the continent.

PRESS RELEASE
Crossing the Mississippi: The Quad Cities, the Railroad and Art

The arrival of the railroad in the mid-nineteenth century sparked a period of tremendous economic growth that transformed the social and physical landscape of the Quad Cities. Plans for a railroad connecting the Mississippi River to the Atlantic developed as early as 1828 but came to fruition...

PRESS RELEASE
A Trip to Spain

This past October, one of the Figge Art Museum’s most treasured Mexican Colonial paintings, Baltasar de Echave Rioja’s La Adoración de los Magos, 1659, Gift of C. A. Ficke, 1925.84, traveled to Madrid, Spain for the exhibition Painting of the Kingdoms – Shared Identities.

Tracks: The Railroad in Photographs from the George Eastman House Collection makes its way to the Figge Art Museum, Davenport, on January 15th, 2011. Organized by the George Eastman House, Tracks covers 160 years of railroad history in photography. Both the railway and photography developed concurrently at the beginning of the 19th century and shared similar impressions on people’s view of previously unseen landscapes. These inventions permitted, for the first time, a person’s ability to be transported, both visually and physically, to worlds they had only previously imagined. Both forever changed the way the world was perceived.

This Sunday January 30th, the Figge Art Museum and the University of Iowa will be hosting a public reception celebrating three new exhibitions at the museum – Tracks: The Railroad in Photographs from the George Eastman House Collection; Crossing the Mississippi: The Quad Cities, the Railroad and Art; and Those Who Can: The University of Iowa School of Art & Art History Studio Faculty Exhibition. 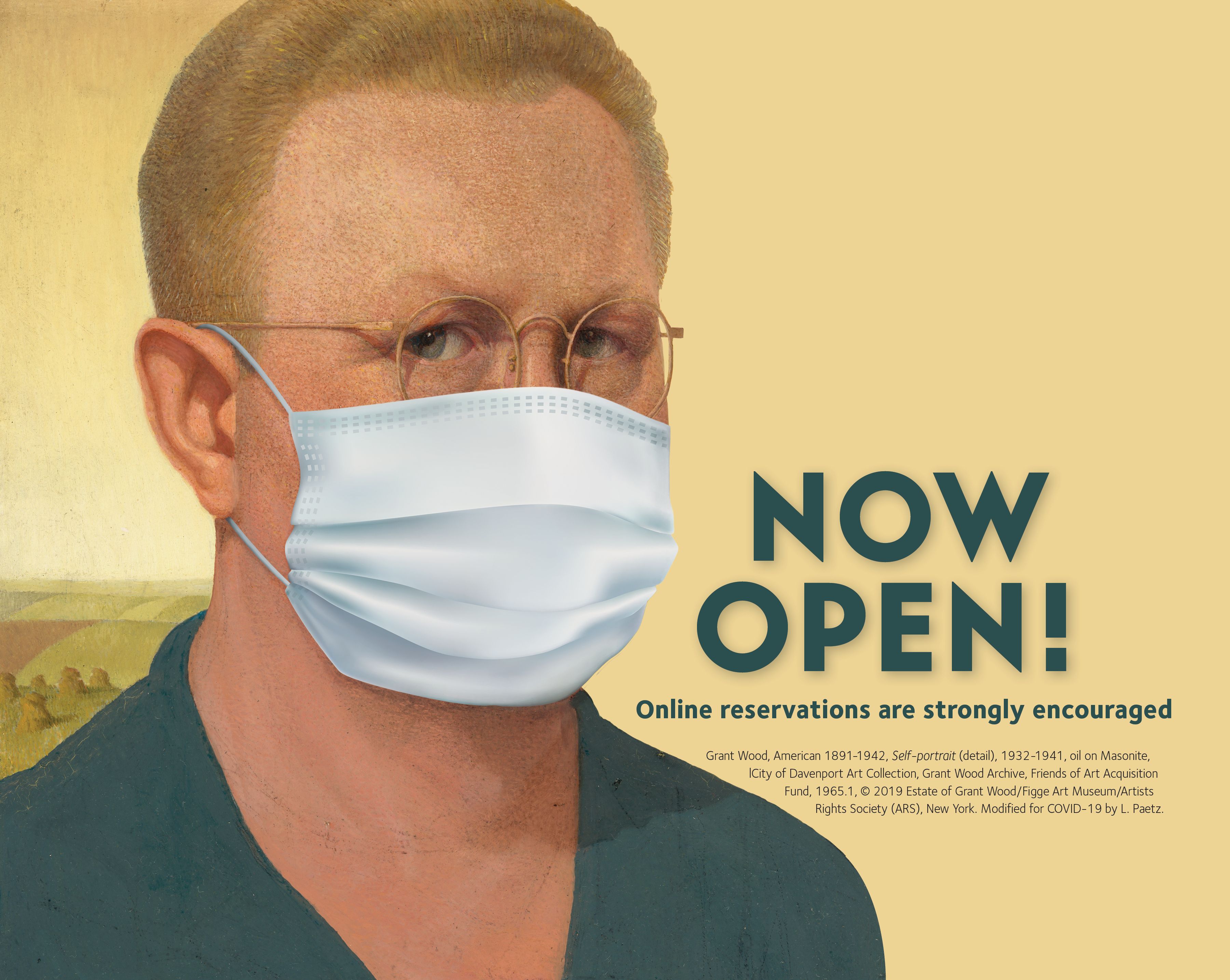 The Figge is Open!

EVENT
Virtual Yoga at the Figge