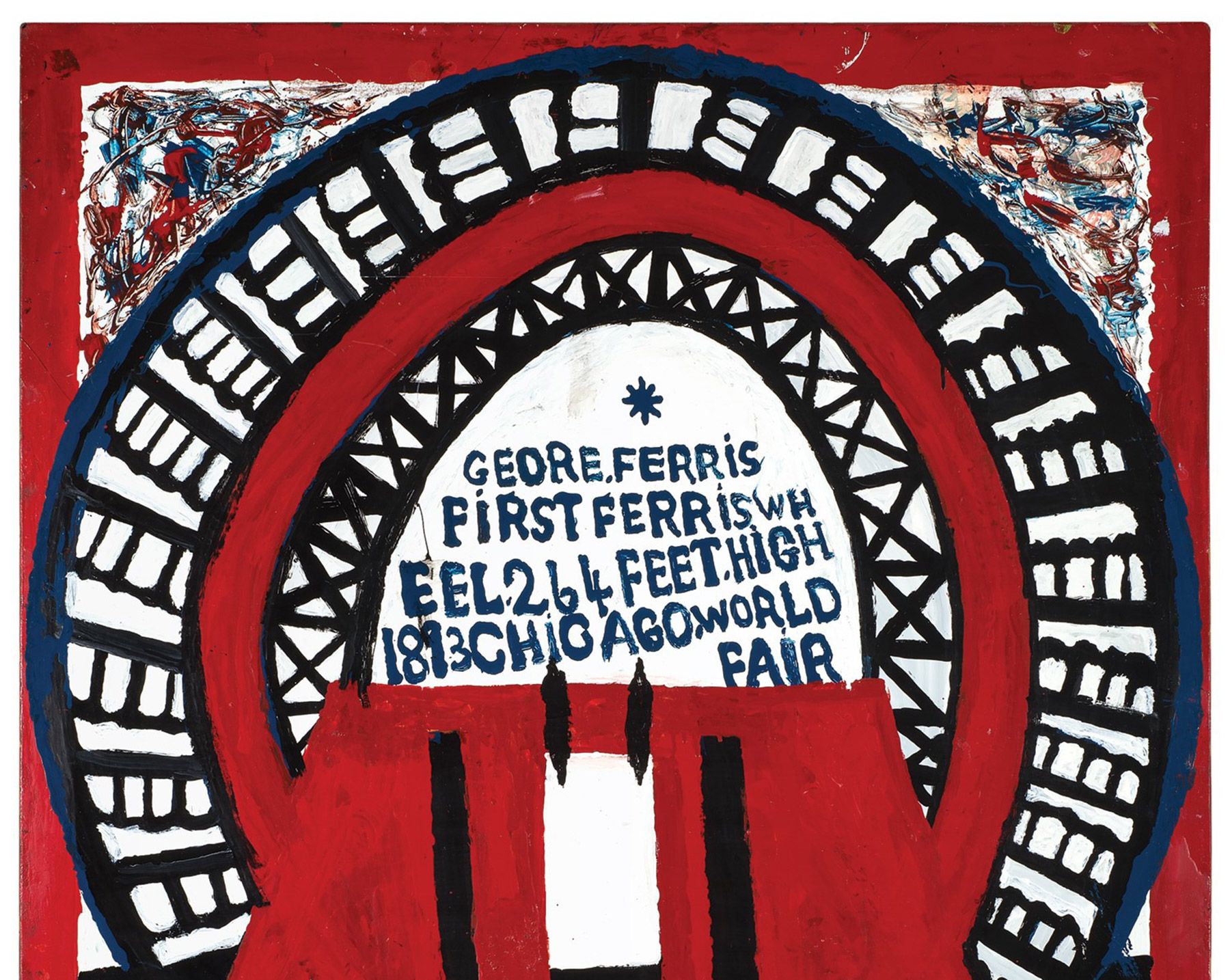 Davenport, Iowa (September 17, 2018) – The Figge Art Museum will present William L. Hawkins: An Imaginative Geography beginning Saturday in the first and fourth floor galleries. This is the first major exhibition in more than a decade to feature the work of the self-taught Columbus, Ohio artist. Organized by the Figge Art Museum, William L. Hawkins: An Imaginative Geography opened in Hawkins hometown of Columbus, Ohio at the Columbus Museum of Art earlier this year. It then traveled to the Mingei Museum in San Diego, and will be shown in Columbus, Georgia in early 2019. Traveling from coast to coast, “William L. Hawkins represents the Figge’s first major nationally traveling exhibition,” said Director of Collections and Exhibitions, Andrew Wallace, who worked with Guest Curator Susan M. Crawley to assemble the exhibition and the accompanying catalogue.

“William L. Hawkins was a self-taught artist whose bold images hold their own with the very best of contemporary works,” said Tim Schiffer, executive director of the Figge Art Museum. “This exhibition gives proper recognition to Hawkins’ tremendous creativity, and is part of an ongoing re-evaluation of the work of artists who, without formal training, achieved such mastery.”

From his pictures of exotic wild animals to dramatic depictions of the major buildings in his hometown of Columbus, Hawkins always wanted his pictures to sweep his viewers off their feet. This exhibition includes examples from every type of subject matter he favored. It features 67 works, including paintings, drawings and sculpture, as well as some of the artist’s unusual tools and the suitcase in which he kept his “research,” the mass media images from which he drew inspiration.

Hawkins explored the world through mass media and then re-presented it to the public with a uniquely expressive bravado. He appropriated most of his subjects from drawings and photographic reproductions he amassed from newspapers, books, calendars, magazines and other popular print media. Simplifying the forms and heightening the colors, he elaborated passages with vigorous, swirling brushwork. As he became more successful, Hawkins collaged magazine illustrations and eventually found objects into his paintings and developed the unique technique he called “puffing up” a shape: building it up from the painting surface by mixing cornmeal into the enamel paint.

Drawn from important public and private collections across the United States and Europe, William L. Hawkins: An Imaginative Geography features many of Hawkins’ most powerful paintings, including the Figge’s own “Prudential NYC” and two examples each of his iconic paintings “Red Dog Running,” and “Tasmanian Tiger.” One of the more remarkable accomplishments of this exhibition is that it brings together eight of the nine known versions of Hawkins’s “Last Supper,” one of his best-known subjects.

Gildehaus Endowment, Iowa American Water, Marc and Gma Howze, GLH Galleries and Wells Fargo, William L. Hawkins: An Imaginative Geography is accompanied by a fully illustrated 192-page catalogue with essays by Susan M. Crawley, Jenifer P. Borum, Curlee R. Holton and others. It will be on view through December 30, 2018.

About William L. Hawkins: As he boldly declared on his paintings, William Lawrence Hawkins was born on July 27, 1895. He grew up on his family’s prosperous farm in Kentucky and moved to Columbus, Ohio, when he was 21. Although Hawkins probably started drawing as a child and is thought to have been selling drawings by the 1930s or 1940s, his earlier work had disappeared by 1970. He began painting seriously in the 1970s, first with found paint on found supports and later with sign painter’s enamel on standard-sized Masonite boards. In 1981 a friend entered one of Hawkins’s paintings in the Ohio State Fair, where the judge moved it out of the amateur category and awarded it first prize. Since his death, Hawkins’s work has been shown in a number of solo exhibitions and in dozens of group shows, but for 13 years, no major exhibition has been exclusively devoted to his work until now.

Anne Lindberg: think like the river with poet Ginny Threefoot